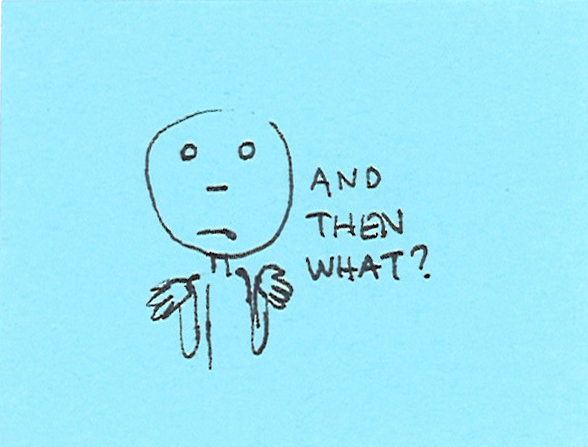 Whenever I find myself treading water on a piece of fiction – can’t figure out where to go next, how to get where I think I am going, of am just plain bored with where I find myself – I fall back on a practise that came out of a workshop presented by the dynamic duo of Jack Remick and Robert Ray. 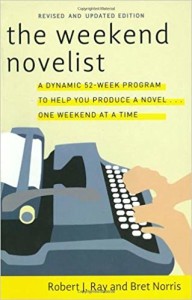 It’s called Writing Down the Page… or, as I call it And Then…

I begin with a very brief summary line to conveys my starting place (sometimes picking it up from the MS), then riff down the page one line at a time, each of which begins And Then…

As this is a brainstorming exercise I don’t judge or edit what gets listed, but I do try to start each line with an active verb – which helps provide momentum for the scene.

This is what one riff looked like, when I was stuck in place on a chapter book entitled Cheese Dreams.

Set-up: Brianne and her brother Peter have just arrived at the new apartment over the shop that their dad will be running as a cheese shop and deli. His businesses always fail, forcing the family to move, yet again, which means Brianne finds it hard settling in and making friends. She hopes this will be the last time they have to move if her Dad can make a success of the deli.

Their mother starts unpacking in the upstairs apartment.

And Then (AT) Brianne follow their father downstairs to inspect the shop
AT – When Dad unlocks the door, the alarm goes off
AT – B is sent upstairs to ask her mom for the alarm code
AT – Her mom tells her its in her dad’s pocket
AT – B races back downstairs to tell her dad.
AT – Brother cries because the shop alarm hurts his ears
AT – Their dad finds the code, punches it in
AT – the police arrive
AT – While Dad huddles with the police showing proof he owns the shops
AT – Brie and her brother go inside to look around the premises
AT – Their father joins them, to show them where the coolers and the counter will go
AT – As leads them out, Brie notices what looks like a mouse hole in the skirting board
AT – She hurries her dad outside before he sees it
AT – Back upstairs Breanne wonders how she can get rid of the mice before they ruin her dad’s business by eating all the cheese.

This seems – and is – a very simplistic example, but the process can be helpful in keeping you going when it feels as if you’ve come to a dead stop. And it can work even better when you get someone else to throw ideas at you. Don’t judge them, just keep And Then-ning until you run out of steam.

Then you can go back and see what elements work to bring the scene alive.